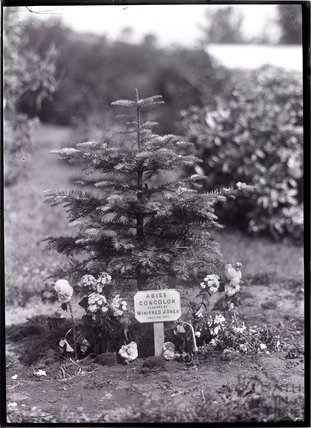 Winifred Jones grew up in Spital Lodge, Chesterfield. She was the daughter of a solicitor and had at least one sister, Gladys, who became the playwright Gwen John.

Winifred was arrested in Newcastle in 1909 during the visit of then Chancellor of the Exchequer, David Lloyd George. Lloyd George was canvassing support for his ‘People’s Budget’, designed to introduce new welfare measures. Suffragettes attended public meetings to press for Votes for Women. Some also protested more forcibly. Lady Constance Lytton threw a stone at Lloyd George’s car and Jane Brailsford produced an axe from a bouquet of flowers to break down a barrier.

Winifred was arrested for breaking windows at the Palace Theatre. The night before the protest, the suffragettes gathered together to discuss their plans and what would happen to them if they were arrested. Lyndsey Jenkins, in her biography of Constance Lytton, reveals that Winifred who was on her first arrest, and barely out of her teens, asked question after question, including if the authorities would take away her tortoiseshell combs.

She was later arrested, with Beatrice Saunders, in 1910 for causing willful damage to Nos 10 and 11 Downing Street and sentenced to a month’s imprisonment.

In 1910, Winifred hosted Adela Pankhurst on a visit to Chesterfield.

In the 1920s, Winifred was living in Lincoln’s Inn, London with her sister, by then a successful playwright. Gwen wrote a play about Elizabeth I, called Gloriana and the sisters worked with another pair of suffragette sisters, Millicent Fawcett and Agnes Fawcett to finance the restoration of a statue of Elizabeth I in St Dunstan’s church. Winifred died in 1955.

“We appeal to the Government to yield, not to the violence of our protest, but the reasonableness of our demand.” Winifred Jones, with her ten co-arrested, in a letter to the Times in October 1909.