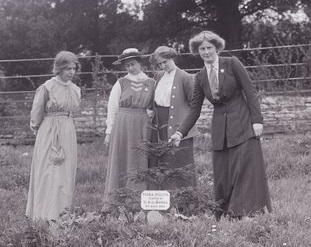 Charlotte was born in 1887, the daughter of an artist. She was educated in Newcastle, Wrexham and Bordeaux. She then trained as a sanitary inspector – one of the first women to do so. This exposure to the difficult lives of many women shocked her into joining the WSPU in 1907. She thought women needed a voice. Charlotte enjoyed hockey, golf and swimming.

In June 1908, Charlotte was arrested for obstructing the police and sentenced to a month in Holloway.  She also applied to be Mrs Pankhurst's chauffeur. Although Vera Holme got the job, Charlotte occasionally drove the Pankhursts.

In 1909, she disrupted a meeting of Herbert Asquith’s by climbing on the roof of the building and tearing up slates and throwing them down to the street with a warning to any passersby. Police tried to get her and three other suffragettes down by using a hosepipe and throwing stones but this failed, although Charlie ended up with blood on her face and was soaked by the hose. Eventually Asquith left in his motor car with the suffragettes throwing slates into the back of it.  They were sentenced to two weeks imprisonment and decided to go on hunger strike, which Marion Dunlop-Wallace had deployed for the first time a few weeks earlier. This time, the authorities at Winson Green prison decided to use force-feeding; Charlotte was force-fed 139 times. The authorities also refused to let her out to see her ill father who died a few days after her release, despite  The Guardian’s C.P. Scott writing to Asquith to try to secure her release. Charlotte attracted media interest during her years of activism and the attention of later producers working on suffragette programmes. The Times described her as ‘strikingly beautiful with blue eyes and long corn coloured hair.’

In 1910, she worked for the WSPU in Oxford and later Portsmouth and Southsea. At this period she was a vegetarian and described as a nice, quiet girl. In 1912, she smashed nine windows in a campaign and was sentenced to six months in Aylesbury prison. She recuperated in Switzerland before working for the WSPU in Nottingham. In June 1913, she was standard bearer at Emily Wilding Davison’s funeral.

She planted a Picea on 5 March 1911. The plaque was labelled CAL Marsh. Calm, along with Charlie, was one of her nicknames.

During World War I, Charlotte was Prime Minister Lloyd George’s chauffeur. She was also a land-girl in Surrey. During World War I, Charlotte became critical of the Pankhurst’s running of the WSPU and left to set up her own Independent WSPU in 1916. After the War she worked for the Women’s International League for Peace and Freedom, London County Council and was an executive member of the Six Point Group, which campaigned for women’s rights. She died at her home in Wimbledon in 1961.

“I was walking down the Strand as if I was playing hockey” – Charlotte Marsh describing the day she smashed nine widows.