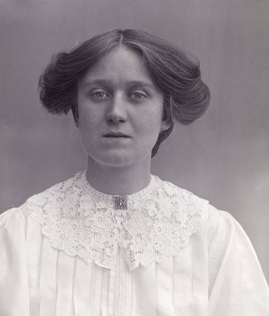 Laura was born in Blything, Northumberland in 1885, the daughter of a school’s inspector. She was brought up in Salisbury and became a teacher.

Laura joined the WSPU and gave up teaching, becoming a full time WSPU organiser in 1909, working in the Midlands. Along with Charlotte Marsh and Mary Leigh, she climbed onto the roof of Bingley Hall in Birmingham to disrupt a meeting including Herbert Asquith, throwing tiles at his car. The women were hosed and eventually pulled down from the roof soaking wet. The three were imprisoned at Winson Green jail and, after hunger striking, became the first women to be force fed, the prison doctor remarking that Laura was ‘very determined.’ She later tried to sue the government and drew on her experiences of forced feeding whilst campaigning across the country.

In 1911, suffragettes boycotted the census. Laura hired a room in Jezreel’s Hall dance academy in Gillingham and invited people to spend the night there to evade the Enumerator. The party started at 1130pm and she provided refreshments. However, after the police came in response to complaints about the party, they were counted at the dance hall, 39 women and one male.

In 1912, Laura resigned from the WSPU after the Pethick-Lawrences left in protest over the increasing violence.

“Why did you do this to me?” Laura to Herbert Asquith, waving a poster about force feeding.