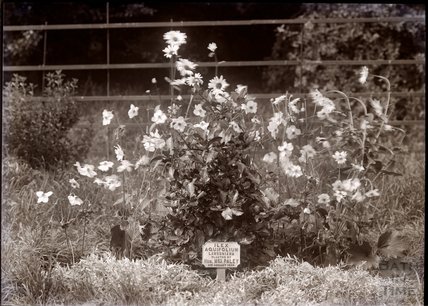 The Hon. Clara Emily Charlotte Strutt was born in Essex in 1845, the daughter of Lord Rayleigh and his wife, Clara Vicars who was born in Mauritius. Lord Rayleigh married Clara when she was 17, and he was 46. Neighbours had assumed he was courting her mother.

Clara Strutt had six brothers, the eldest, John,  became the third Baron Rayleigh, after their father's death in 1873. John was an eminent scientist, winning the 1904 Nobel Prize for Physics for his discovery of argon. He was also President of the Royal Society and Chancellor of Cambridge University. John married Evelyn Balfour, the sister in law of Lady Betty Balfour, and brother of Prime Minister Arthur Balfour.

In old age, Clara wrote an account of her brother which provides details of their childhood, including shooting parties, trips to Southend and toys 'made by our very own carpenter.' when Clara was seven, she and John went on a trip to London. They saw a globe in Leicester Square and in the Houses of Parliament, spotted the Duke of Wellington.

Lady Rayleigh was an ardent supporter of women's suffrage.

Clara married John Paley, a wealthy Suffolk landowner in 1871. They lived at Ampton Hall, near Bury St Edmunds, a household that included a Butler, housekeeper and two footmen. Their only child, George, was born in 1874. John died in 1894.

The extent of Clara's involvement in the suffrage cause is unknown. Her mother was described as an 'ardent supporter.' It is possible that Clara was influenced by the Balfour family. Several of her brother John's Balfour sisters in law were prominent in the movement. One was a Principal of Newnham College, Cambridge, another Lady Frances Balfour, was a prominent campaigner and Lady Betty Balfour, sister of Constance Lytton was prominent in the Conservative and Unionist Women's Franchise Association (CUWFA).

Certainly, Clara, described as the Hon. Mrs Paley, was the local President of the CUFWA in Bath for an event in February 1910, when Betty Balfour was principal speaker. Other local suffragettes, with links to the plantation, Annie Kenney, Georgia von Donop and Lilias Ashworth Hallet were also present.

in 1897, Clara had inherited her aunt's house, St Catherine's Court (later the home of the actress Jane Seymour and pop star Robbie Williams. Radiohead and The Cure both recorded albums there). The press recorded that servants from St Catherine's Court attended Clara's funeral, which took place in Suffolk, implying that she spent a good deal of time in Bath.  St Catherine's Court is close to the Blathwayt House and Clara planted an Ilex Aquifolium on 2 August 1910.

Clara did not live to vote. She died, aged 67, on 23 December 1912, at Blunts Hall, Essex. The report in the Chelmsford Chronicle describes how she was staying with her brother Charles. Due to his departure for Java, she was supposed to go to stay with her eldest brother but was too ill to travel and died. Her son was living in Egypt at the time.

Clara was buried at Ampton Hall.