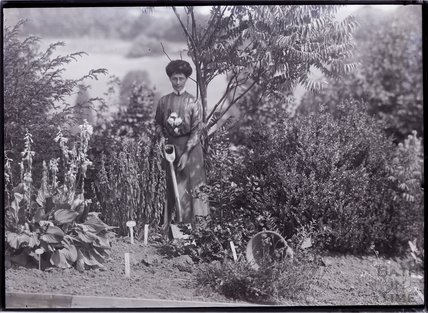 Vida Jane Mary Goldstein was born on 13 April 1869 in Portland, Australia, moving to Melbourne where she attended the Presbyterian Ladies college. Her father Jacob, an army officer, was an immigrant from Ireland, with Polish and Jewish ancestry. Both her parents were active social reformers. Her mother Isabelle Hawkins also supported female suffrage, although her father did not. Vida had three sisters and one brother. Vida and her sisters later ran a school in St Kilda.

As a young woman, Vida collected signatures for her mother on a suffrage petition. However, her interests at this time were concentrated on social reform, although she later came to see women’s social issues as a product of their disenfranchisement. In 1899, she became President of a suffrage organisation, travelling to the United States to attend an international suffrage meeting in 1902, where she met President Roosevelt and gave evidence to Congress. She was inspired by the original views and wide interests of American women.

She stood for Senate a further three times, espousing left wing courses which alienated some of the electorate, and her fellow suffrage campaigners.  After the vote was won, she campaigned for social rights and was a pacifist during World War I. She created a number of magazines and newspapers on women’s issues, lobbying for equality of property rights, birth control, equal naturalisation laws, the creation of a system of children's courts and raising the age of marriage consent. She did not, however, believe that indigenous women should be given the vote.

In 1911, she visited the UK at the request of the WSPU and spoke to packed audiences. It was during this period that she visited Eagle House and planted a tree in Annie’s Arboretum.

In 1919, Vida spent three years working at a Women's Peace Conference in Zurich. She grew more interested in socialist and labour issues. In time, she became a Christian Scientist, setting up that church in Australia. She never married, living with two of her sisters. Vida died of cancer at her home in South Yarra on 15 August 1949, aged 80.

In 1984, an electoral division in Melbourne was named after her. Vida also appears as a character in Wendy James’ novel, Out of the Silence.

Woman represents "the mercury in the thermometer of the race. Her status shows to what degree it has risen out of barbarism” Vida Goldstein.