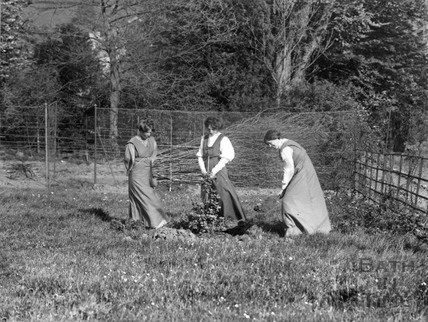 Vera was born in Birkdale, Lancashire in 1881. She was the daughter of a timber merchant. She had a brother, Gordon, who would later name his children after her, a daughter ‘Vera’ and a son ‘Jack’ and was educated at a convent In Belgium. She became an entertainer at the Savoy Theatre, London. She was a talented violinist and singer and performed in a selection of Gilbert and Sullivan operas in 1906 -7, where she asked Gilbert to inscribe her copies of the score. Vera worked for Gilbert at the Savoy again from 1908 to March 1909, with a contract as a contralto chorister and it was during this time she joined a number of actresses (including Ellen Terry, Sybil Thorndike, Lily Langtry) to form the Actresses’ Franchise League (AFL).

Vera joined the WSPU in 1908. Sylvia Pankhurst described her as “a noisy and explosive young person, frequently rebuked by her elders for lack of dignity.” In 1909, with Elsie Howey, she hid in a large pipe organ at Coulston Hall in Bristol to disrupt a political meeting by calling ‘Votes for Women from their hiding place. Vera wrote an account of this in Votes for Women.

…Our voices rang out from the twilight,

But nowhere could we be found;

They looked from the floor to the ceiling—

Then stewards came searching round.

In 1909, Vera was appointed chauffeur to Emmeline Pankhurst and appeared as Hannah Snell, the woman who went to war disguised as a soldier, in A Pageant of Great Women, by Cicely Hamilton. She was arrested at least three times. In 1911, she began a relationship with fellow suffragette Eveline Haverfield who founded the Women’s Emergency Corps after the outbreak of WWII.

Vera planted a Ilex Aquifolum on 9 May 1910. Her papers are held at the Women’s Library at the LSE.

In 1915, Vera travelled to Serbia where she was in charge of horses and trucks for the Scottish Women’s Hospital units. In 1917, she returned to London to deliver a report on the situation of the Serbian Army to Lord Derby, the Secretary of War. She remained close to the Serbian people after the war, as administrator for the Haverfield Fund for Serbian Children, and revisited the country in 1934.

Following Eveline’s death in 1920, Vera spent a lot of time with Edith Craig, Clare Atwood and Christabel Marshall at their home at The Priest's House, Tenterden. Other visitors included Radclyffe Hall, Una Troubridge, Vita Sackville West and Virginia Woolf. Vera eventually settled in Scotland, near Kirkcudbright in an artistic community.

She was an acting member of the Pioneer Players from 1914 to 1915 and again from 1917 to 1920. For many years Vera helped stage the annual Ellen Terry memorial performances in Kent.  She died in Glasgow on January 1, 1969.

“Mrs Pankhurst thought I was very giddy and she wasn't at all for having me because I used to act the galoot in the office” Vera Holme on her interview to be the Pankhurst chauffeur.