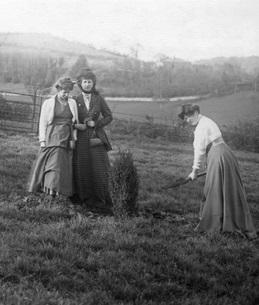 Clara Codd, the eldest of ten girls, was born in Bishop’s Tawton near Barnstable in 1876. Her father was an inspector of schools. Her mother was half Italian and Clara was educated by governesses. On the death of her father in 1899, the family moved to Geneva, where she worked as an English teacher, a fashion model, which gave her a lifelong love of hats, and a concert pianist, touring France and Switzerland.

After working as a governess in Ireland, she returned home to Bath and became a member of the Social Democratic Federation and the Theosophical Society.

In 1908, aged 32, Clara became the honorary secretary of the Bath branch of the WSPU. Emily Blathwayt’s diary records how Clara and Annie Kenney were attacked during a meeting in Bath. The crowd silenced her and then rushed the stage, leaving her needing a police escort to get home.

In October that year, she was arrested at a demonstration outside the House of Commons and sentenced to one month's imprisonment. Clara spent the day hiding in Westminster Underground Station and at 8pm walked through the police cordons and into the House of Commons. In Holloway, Clara was put in solitary confinement and noticed there was just one size of prison skirt for all inmates. A vegetarian, she found the food limited. Later in 1908, she turned down a paid role with the WSPU and left the organisation.

Clara spent the rest of her life as a travelling lecturer for the Theosophical Society. She lived in Adyar, India for two years and spent time in the United States, New Zealand and Australia, where she was general secretary from 1935 to 1936. During the Second World War, she lived in South Africa.

Clara published a number of Theosophical books and her own memoirs, So Rich a Life, in 1951. She died in Berkshire in 1971 having spent her last years living with two of her sisters in Ways End, Camberley.

“I came into contact with all sorts and conditions of men, and learned to be free and a friend of all that lives, instead of the proper, little caste-ridden Victorian that I was in the beginning." Clara Codd, circa 1900.