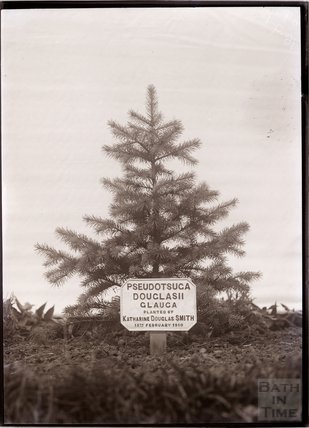 Katherine Douglas Smith is the subject of a famous photograph, standing on a soapbox, addressing a large group of men and boys – a field of heads in flat caps - in Portsmouth; a large smile on her face and a grinning audience. Despite this iconic image, we have not been able to discover much about her life.

She was the daughter of a professor of surgery at King’s College, London and an assiduous member of the WSPU.

In 1908, she took part in a protest on the House of Commons lead by Marion Dunlop Wallace. In 1909, she arrived at Downing Street in a taxi with two other women. The street was sealed off with a cordon of police officers following an earlier demonstration, but Katherine managed to talk her way past the cordon, driving the taxi up to the door of No 10. She was imprisoned for a month. In another protest with Maud Joachim, Katherine held up traffic in the West End, riding black bay horses up the Strand, advertising a Suffragette meeting at the Royal Albert Hall. Maud left Katherine a legacy in her will.

Katherine wrote a review of a biography of St Catherine of Siena in the July 1911 edition of Votes for Women, which may suggest an interest in religious issues.

She planted a pine tree – a pseudotsuga douglasii glauca – a Douglas fir - on 18 February 1910.

'A woman with an essentially practical and sensible nature…and deep sympathy for the sufferings of humanity.' Katherine Douglas Smith on St Catherine of Siena.