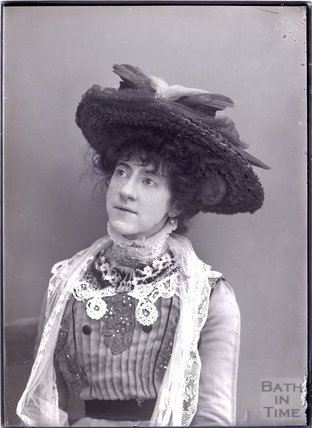 Edith was born in Crowhurst, Surrey in 1868, the daughter of George, Curate of Crowhurst, and Mary Caroline (nee Gray). Her father died in 1875 and Edith and her mother moved to Bath. As a teenager, Edith contributed essays to the Girl's Own Paper and later studied botany and geology at Oxford. In 1890, she won a competition for an essay on 'The Intellect of Women.' Between 1894 and 1902, she published three novels, The Vengeance of Medea, Anthony Graeme and A Slow Awakening

Edith was a member of the WSPU but left as their actions became more violent, rejoining the Bath Branch of the National Union of Women’s Suffrage Societies (NUWSS) and serving as Secretary from 1909-13.

In 1913, Edith was found unconscious in a canal, possibly falling in whilst collecting water weed. She was a keen botanist and during World War I moved to Buckinghamshire where she worked on a Medicinal Herb School and Farm. Edith was a founder member of the National Herb Growing Association and her interest in botany fostered a friendship with the writer Beatrix Potter who sent her a Peter Rabbit postcard in 1928. Edith returned to Somerset, living in Tickenham near Clevedon where she wrote several botany books in the 1930s.

There is a fuller account of Edith's remarkable life by local historian Helen Hobbs here.

'To Beatrix Potter in memory of the summer when I found the Grass of Parnassus on the mountain side, and we dried the foxglove leaves in her barn'. Edith Grey Wheelwright in the inscription of her book The Physick Garden, 1939.