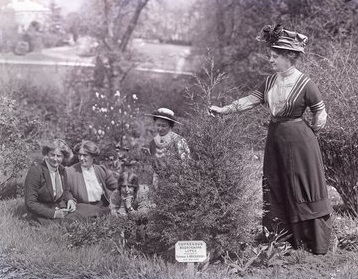 Georgina Agnes Brackenbury was born at the Royal Military Academy, Woolwich in 1865. Her father was a General in the British Army. Her mother, Hilda, was Canadian. She was one of nine children, her sister Marie was also a suffragette. In 1890, her father died. The family grew up in London and later in Newcastle and Peaslake, Surrey.
Georgina studied at the Slade Art school from 1888 – 1900, she specialised in portraits and exhibited in London galleries, including the Royal Academy.

Georgina’s mother joined the WSPU in 1907, and was followed by Georgina and her sister Marie. Georgina was arrested in February 1908, along with Marie, at a demonstration in the House of Commons and was sentenced to six weeks in Holloway. The Manchester Courier and Lancashire General Advertiser reported that after their release the Brackenbury sisters attended a party where the magistrate was present. He commented that “he was doing what he was told” when he sentenced them to six weeks in prison. Following her release, Georgina spoke at suffragette meetings in the UK and Germany. In 1909, she was working for the WSPU in Bristol before moving to Manchester in 1910.

In 1912, Georgina’s, along with her eighty year old mother was arrested for smashing windows at the United Service Institute on Whitehall, choosing this building to contrast her own lack of political rights with that of her soldier brothers. They were sentenced to 14 days in Holloway.

When Annie Kenney was the first woman to be released from prison under the Cat and Mouse Act, she went to the Brackenbury home, at 2 Campden Hill Square in London, naming it ‘Mouse Castle’.

In 1927, Georgina painted a portrait of Emmeline Pankhurst which now hangs in the National Portrait Gallery.  An earlier portrait by Georgina, of Viscount Dillon, is also in their collection. Georgina was a pall bearer at Emmeline Pankhurst’s funeral. She herself died in 1949.

“I feel that my daughters are doing a service to their country in exactly the same way as my sons would do on the field.”  Hilda Brackenbury, 1908.