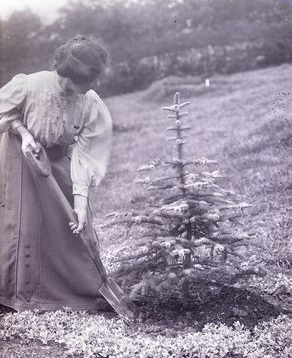 Mary was born in Hampshire in 1880. Her father was a progressive doctor who encouraged her involvement in the Suffragette movement.

In 1904, Mary was working for the Glasgow and West of Scotland Association for Women's Suffrage. She also wrote a column for Forward, a Scottish socialist publication, and eventually concluded that constitutional, or peaceful, protest had failed. She joined the WSPU, establishing its Glasgow branch in 1907.

She was arrested in 1908, serving a three month sentence, the longest of any suffragette. On her release she was met by fellow Scot, Flora, ‘the General’ Drummond, bagpipres and tartan clad suffragettes. Marythe  worked for the WSPU as organiser in Plymouth. In January 1909 Mary became WSPU organiser in Newcastle and also protested in Cornwall and Devon. In July, she was arrested with Vera Wentworth and Elsie Howey after interrupting a meeting held by Lord Carrington. All three women went on hunger-strike.  Mary Blathwayt’s diary records that Mary was released “when she took to fainting”.

She was next arrested in 1912, in Chester, for throwing flour at the Prime Minister, Herbert Asquith.  Her fine was paid by a local sympathiser, without her consent, and she was released.

Mary joined Sylvia Pankhurst in establishing the East London Federation of Suffragettes (ELF) which worked closely with the Independent Labour Party. Mary was involved in its paper for working class women. The Women’s Dreadnought and lived above the ELF shop in Poplar. In 1915, she joined the United Suffragists, working in Southwark and later worked for the Women’s International League and Save the Children Fund.

From 1928 to 1955, she worked in Communications for the brewing trade and after her retirement volunteered with the Publications Department of the National Council of Social Service.

From 1928 to 1955, Mary worked in Communications for the brewing trade and after her retirement volunteered with the Publications Department of the National Council of Social Service.

“Can it really be true that, in a civilised country with a democratic form of government, so much time had to be wasted, such stupendous efforts made, so much suffering endured, to correct such an obvious anomaly as the exclusion from full citizenship of more than half the adult population?’ Mary Phillips, 1956.