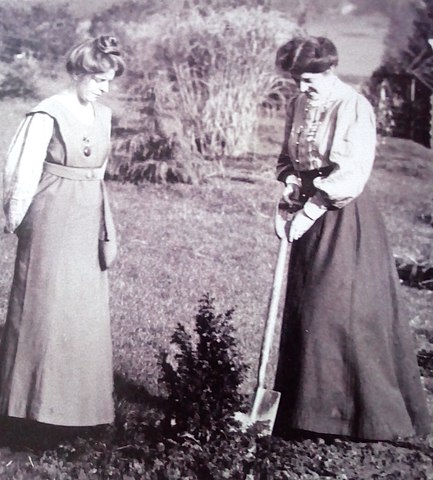 Theresa Garnett was born in Leeds in 1888. Her mother died in the West Riding pauper lunatic asylum when Theresa was a baby. She was brought up by her paternal grandparents and educated at a convent school. She later became a teacher. She joined the WSPU after hearing Adela Pankhurst speak.

Theresa escaped imprisonment after she chained herself to a statue in the House of Commons. However, in June 1909, aged 21, she was arrested during a demonstration outside the Houses of Parliament. Sentenced to a month in Holloway, she went on hunger-strike. She was accused of biting and kicking a wardress, found guilty of assault and sentenced to a further term of imprisonment.  In August 1909 she demonstrated, with Mary Leigh, on the roof of the Sun Hall in Liverpool. She was imprisoned in Walton Prison, but after going on hunger-strike, was released later that month.

Theresa gatecrashed a Foreign Office reception to celebrate King Edward VII’s birthday in June 1909, borrowing a dress and taking a young Cambridge student as her ‘husband’. She made a speech and was ejected.

In November 1909, she accosted Winston Churchill at Bristol train station with a whip, although she did not hurt him. She was arrested for assault but was found guilty of disturbing the peace and sentenced to a month's imprisonment in Horfield Prison. She was force-fed and set fire to her cell in protest, ending up in solitary confinement. She was nicknamed St Theresa.

In 1910, Garnett became WSPU organizer in Camberwell. However, she disagreed with the WSPU arson campaign and left the movement.

During the First World War, Theresa worked as a Sister at the Royal London Hospital. This included a spell on the Western Front in France. After the war she joined the Suffragette Fellowship, founded in 1926 to bring former suffragettes together, and the Women's Freedom League. She was also a member of the Six Point Group, founded in 1921 by Margaret Haig to work for women's equality.  Theresa Garnett died in 1966.

“Take that in the name of the insulted women of England!”  Theresa Garnett to Winston Churchill, 1908.