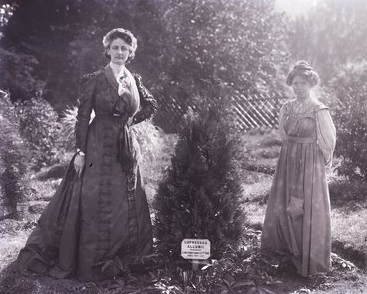 Constance Lytton was born in 1869 into the aristocracy; her father was an Earl and later Viceroy of India, where Constance spent much of her childhood. She had two sisters and four brothers. When the family returned to England, Constance became involved in charitable works.

Constance made speeches across the country. She was arrested, including in Newcastle where she tried to persuade the young Winifred Jones not to protest, but when the authorities discovered her father was an Earl, she was released. In 1910, she travelled to Liverpool using the name Jane Wharton, choosing Jane because it reminded her of Joan of Arc.  She was arrested and force-fed during a hunger strike. Elsie Howey get arrested in sympathy and called out ‘No Surrender’ to Constance in her cell.

Constance never recovered entirely from force-feeding. She lived with her mother after the vote was won and died in 1923 at the age of 52. She was buried in the green, white and purple of the suffragettes. Her headstone reads:

“Endowed with a celestial sense of humour, boundless sympathy, and rare musical talent, she devoted the later years of her life to the political enfranchisement of women and sacrificed her health and talents in helping to bring victory to this cause.”

"One of the numerous gang of upper class, leisured class spinsters, unemployed, unpropertied, unendowed, uneducated…economically dependent entirely upon others…A maiming subservency is so conditional to their very existence that it becomes an aim in itself, an ideal. Driven through life with blinkers on, they are unresentful of the bridle.” Constance Lytton describing herself.