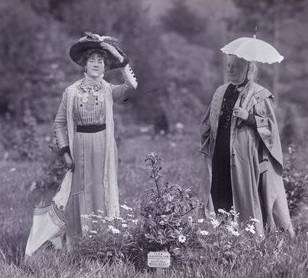 Lilias Ashworth was born in in 1844. Her maternal uncle was the prominent quaker radical, Jacob Bright. In 1877, aged 33, Lilias married Professor Thomas Hallett of Bristol University, a Liberal academic who supported free trade.

In 1867, at the age of 23, Lilias joined the London Society for Woman’s Suffrage, five years later she sat on the Executive Committee of a new organisation to apply more pressure on Westminster. Lilias was a talented public speaker. She also sat on the Married Women’s Property Committee - until 1882, women lost ownership of their property after marriage. Lilias had inherited considerable wealth from her parents. In 1871, Lilias organised Millicent Fawcett’s tour of the West Country.

In 1903, Lilias became a member of the Executive Committee of the National Union of Women’s Suffrage (NUWSS). However, after almost 40 years of peaceful lobbying, she became disillusioned. She was initially drawn to the militant WSPU and organised a Savoy banquet to welcome the release of WSPU prisoners in 1906. She was arrested twice in 1907. She avoided imprisonment but commented that if she had been a ‘Lancashire mill-hand’ she would doubtless have been in Holloway.

Lilias became a financial donor of the WSPU. She regularly visited Eagle House and in 1908 chaired a WSPU meeting there, with Annie Kenney the principal speaker. In 1912, she broke with the WSPU over the arson campaign, telling Mary Blathwayt that the militant methods ‘made her quite ill’.

Lilias planted a holly tree on 19 March 1910. Emily Blathwayt recorded in her diary that ‘Mrs Ashworth Hallet was one of the first workers for the suffrage and knew Dr Pankhurst [Emmeline’s husband] before he was married.

“My astonishment was great when I found we were suddenly encompassed by police on foot and horse-back, and our courage rose in proportion to the indignation we felt. Police blocked the footway. They laughed and jeered... I was twice arrested.” Lilias Ashworth Hallet in a letter to the Times after a protest in 1907.