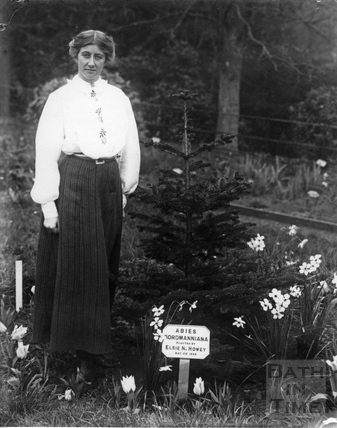 Elsie Howey was the daughter of a Nottinghamshire clergyman. She was born in Finningley, South Yorkshire, in 1884 but the family moved to Malvern after her father’s death in 1887. Her sister Mary was also a suffragette. She attended the University of St Andrews, studying English, French and German between 1902-1904. Elsie enjoyed riding, driving and hockey

In February 1908 Elsie was arrested, along with her sister Mary, for taking part in a demonstration outside the House of Commons. She was sentenced to six weeks' imprisonment. In May 1908, she campaigned with Annie Kenney and Mary Blathwayt at a by-election in Shropshire.

Elsie was arrested for the second time after taking part in a demonstration outside the home of Herbert Asquith. She was sentenced to three months' imprisonment.

Others called her “a wonderful speaker”. Elsie went to work for the WSPU in Bristol.  Whilst there, she and Vera Holme hid in a large pipe organ at Colston Hall to disrupt a political meeting calling ‘Votes for Women ‘ from the organ but no-one could discover where the sound was coming from.

In 1909 Howey rode as Joan of Arc at the head of the procession to welcome Mrs Pethick-Lawrence on her release from Holloway. With Vera Wentworth and Jessie Kenney, she assaulted Herbert Asquith and Herbert Gladstone on a golf course. She was criticised by the owner of Eagle House who wrote to Christabel Pankhurst that Elsie and Vera would no longer be welcome at Eagle House. He wrote that "an attack on one undefended man by three women was an act I did not expect from the Society".

In January 1910, Constance Lytton was imprisoned and forcibly fed at Walton Gaol. In response, Howey broke the gaol governor's windows so that she too would be jailed in support. She was arrested again in 1910, in Penzance, and was on hunger strike for 144 hours. In total, she was arrested six times. It took her four months to recover from throat injuries caused by forced feeding. Her final arrest, in 1912, resulted in all her teeth being broken.

In June 1913, Elsie again played the role of Joan of Arc at the funeral of Emily Wilding Davison.

She planted a Abies Normanniana on 9 May, 1909. The plaque has survived and is in the Roman Baths Museum.