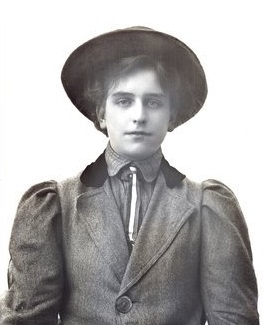 Vera was born Jessie Spink in 1890 and brought up in London, where her father had a chemists shop. She changed her name to Vera Wentworth when she was seventeen, possibly because her parents were embarrassed by her involvement in the suffragette movement. She worked in a shop and was an active trade unionist.

Vera joined the WSPU when she was 18 and was arrested soon after, the first of seven arrests. She was force fed four times. She was an organiser in London, where Sylvia Pankhurst recalled she always wore a portrait of Christabel Pankurst on her chest. She had ambitions to attend university and become a novelist.

She moved to Bristol to work for the Suffragettes where she met Annie Kenney and spent time at Eagle House. She brong a window in Bristol’s Liberal club in Corn Street, using a fossil, with a note saying that “Liberal statesmen are fossilising and out of touch”.  Along with Jessie Kenney and Elsie Howey, she jailed for assaulting the Prime Minister and Home Secretary on the golf course. They also attended the Prime Minister’s church dressed in suffragette colours. The assault on the golf course was unpopular with the Blathwayts who told Vera that she was no longer welcome at Eagle House. She wrote them a long letter of regret but said that "if Mr. Asquith (the Prime Minister) will not receive the deputation they will pummel him again".

Vera also managed to sneak into parliament and put up eight posters reading  ‘To know more about the Women’s Suffrage Movement read “Votes for Women” Every Friday, 1d.’ In 1909, she met the writer Rebecca West, then a teenager interested in suffrage, in Newcastle, who wrote to her sister:

“I was agreeably surprised with Mrs Martel. She is a dear old soul in spite of the hair, and takes the crowd tremendously. Of the prisoners only Elsie Howie and Vera Wentworth are anything like first-rate speakers. Vera W. is a little terror—rather a handsome girl.”

Her younger brother, who at eighteen was a journalist and organiser of a strike of women workers in the East End, introduced her to Fenner Brockway, later a Labour MP and Peer, novelist and campaigner, and they dated. However, a pacifist, he distanced himself from her as she became more violent.

Vera was a member of the ‘Young Hot Bloods’ who volunteered for dangerous duties. The secret society would meet in a tea shop on the Strand – the only older member allowed to attend was Mrs Pankhurst. She wrote two pamphlets and joined the Women Writer’s Suffrage League.  She entertained fellow prisoners in Holloway by imitating the President of the anti-suffrage league, Lord Cromer, putting a button in her eye, presumable as a monocle. Jessie Kenney described how she, Vera and Elsie Howie would hide notes in their stockings in Holloway and pass them to each other in Church. They also got into trouble for playing 'Follow my Leader' in the exercise yard.

Vera studied Modern History and Political Economy at St Andrews University between 1912 and 1914. A fellow student and Suffragette, Janie Allan explained to the University Hall warden how Vera’s health was weakened following her imprisonments and that she had promised ‘to leave suffrage alone for a year or two’. A doctor had advised her to play golf, and she was described as ‘strong and athletic and fond of games, but hockey is forbidden in her present state’. She also wrote a play, An Allegory, which was performed by prisoners at Holloway.  In 1913 she traveled to the USA to speak about votes for women.

During the First World War, Vera was a nurse. Afterwards she worked as a secretary and wrote and edited articles for magazines, using the name Peter Wentworth for fiction.  During the Second World War, she worked on air raid precautions. She joined Leagues for Peace and was a reader for the Fox Film Corporation. She later lived in Cromer Street, London and died in 1957.

“At four o’clock on Tuesday afternoon they brought a nasal tube. They forced me onto my bed and six wardresses held me down. I resisted all I could but it was impossible to hold out against them. That was done twice a day until I came out.” Vera Wentworth following her release from Horfield gaol.