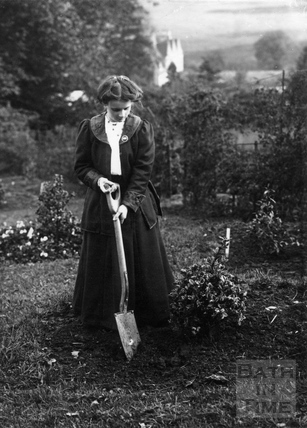 Who was Gertrude Stewart?

A woman by that name was Secretary of a 19th century suffrage movement - the Central and Western Society for Women’s Suffrage. She was also Secretary of a parliamentary committee bringing together regional suffrage societies. Their aim was to canvas MPs with the aim of getting a bill  introduced in Westminster. However, this Gertrude Stewart was working in Parliament Street in London in 1885. The woman shown planting a tree in 'Annie's Arboretum' on 18 October 1909 looks too young to have been active in the 1880s.

Another West Country suffragette supporter, Nora Helen Gertrude Stewart married Leopold Jenner in 1899. The daughter of a Field-Marshall, she had taken the unusual step of divorcing her first husband in 1894. However, this woman was known as Nora and used her married name Jenner. Why would she use the name Gertrude Stewart to plant a tree? And she too is likely to have been close to forty when this photo was taken.

The roll of honour of suffragette prisoners, compiled by the Suffragette fellowship in 1950 has no Gertrude Stewart, but it does have a Gertrude Stuart. Is it this the Gertrude planting the tree?

If you have any information about who this woman might be, please get in touch.